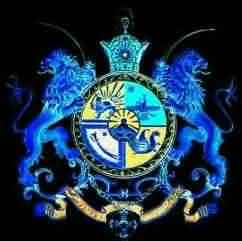 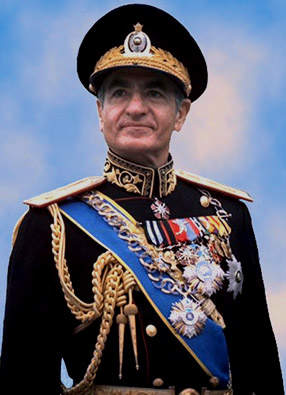 My warm salutations to the great Iranian nation; to the nation whose inexhaustible power has once again come to the fore in this magnificent ceremony marking the solidarity between the Shah and the Nation.

My salutations to the great. monarchs and courageous commanders of Iran's history; to all Iranian women and men who have handed down the flag of our ancient monarchy from one generation to the next as if in fulfilment of a sacred trust.

My salutations to Reza Shah the Great, the renowned commander of Iran's history and founder of the Pahlavi Dynasty, the man who arose from among Iranians and thought of nothing but Iran. For Iran he lived and for Iran he died.

Today, on the 2535th Imperial Now Ruz and on the 50th Now Ruz under Pahlavi rule, before the mausoleum of a great Iranian whose soul is with us, in the name of the standard-bearer of the Iranian monarchy, I  renew the eternal covenant of the Pahlavi Dynasty with my nation which I am honoured to lead:

Taking Iran's history as witness, I declare that we, the Pahlavi Dynasty, nurse no love but that for Iran, and no zeal  but that for the dignity of Iranians; recognise no duty but that of serving our state and our nation.

We have arisen from among the Iranian nation. We have been born in this sacred land, where we will be buried. For 50 years, the solidly united front of the Shah and the nation has been engaged in a glorious endeavour for national resurgence of Iran.  For 50 years, Iran has been an Iran of construction and creativity. An interval occurred in this grand national movement. But now that sinister period is over forever.

We know for certain today that the great Iranian nation is moving down the path toward the Great Civilisation, a path which will lead in a short time to a place among the front ranks of the superior world powers.

The path we have been pursuing hand in hand since the third of Esfand (50 years ago) has indeed been long and difficult. Many of you have participated in state affairs during this period. And the rest of you, the youth and children, will be acquainted with the events of this turbulent period by leafing through the pages of history.

I do not want to leaf through these pages now, because judgment on what has happened is solely the task of history and the Iranian nation. I only remind you that in the course of this period, in one of the bleakest moments of our millennia-old history, the fruits of the arduous endeavours of the Pahlavi Dynasty's founder were undone overnight by a surprise invasion by foreign powers. Our credulity in international relations and our lack of military preparedness. for which there was indeed no chance, made the surprise attackers' task easy.

Thus, you and I, supported by God and bolstered by the everlasting bond between us, succeeded in going through this sorrowful period and starting a new chapter in our ancient history by launching the victorious movement; a chapter in which darkness has retreated before divine light forever.

It was in this new glorious era that once again the miracle of Iranian genius made history. A nation of heroic achievements created a new saga in the most humane manner possible in keeping with its ancient glories; a saga as bright as Iran's sky, as solid as the rocks of the Alborz mountain, as fecund as the azure waves of the Persian Gulf; the splendid saga of creativity and construction; the saga of free women and men, unfettered farmers and steel-muscled workers who participate in the fruits of their own labour, the fabled Education, Health and Development Corps; the saga of the nationwide promulgation of judicial and soccial justice; the saga of the establishment of full sovereign rights over our natural resources; the saga of leading a world movement for a new and just order to replace the old, unjust one.

As the commander of this monarchy, I make a covenant with Iran's history that this golden epic of modern Iran will be carried on to complete victory, and that no power on earth shall ever be able to stand against the bond of steel between the Shah and the nation. We shall never again be caught unawares. The nation and the Imperial Arrned Forces, which come from the ranks of the people and derive their power from our inexhaustible national resources, are alert day in and day out to protect their country. No foreigner or his agents will ever have the chance to penetrate the unshakable structure of our national sovereignty because Iran's destiny is now shaped by Iranians and for Iranians - and this shall always be the case.

Iran today is an Iran of construction, an Iran of Faith, confidence and hope, an Iran of humanism and spiritual maturity This is a role which we play not only domestically but also on a global scale. We know well and so do all other nations of the world that Iran today is a poweraul state whose economic, political anc military might is increasing daily and which enjoys unprececlented international prestige.

But we have declared that our power shall be used solely for the benefit of all humanity. We want peace and progress, welfare and happiness for all other peoples. Our voice in everycase is that of justice and righteousness. We see our happiness and welfare in that of others, not at their expense. The world can count on us as a powerful bulwark for justice and righteousness. And we accept this human mission with all its responsibilities willingly and consciously.

My great and beloved nation, I must once again point out that the secret of all our national achievements lies in the spiritual heritage of Iran's ancient history, in the millennia-old relationship between Imperial leadership and national power and in the mutual selflessness of these two factors.

This unity, in harmony with the power of the Imperial Armed Forces, has produced circumstances where no factor can impede the ever-accelerating progress, of our country, or its achieve ment of noble national objectives. Backed by the Almighty God, you and I, hand in hand, will pursue with iron determination our victorious march toward ever-growing greatness and power and toward constantly-expanding prosperity and happiness. Bolstered by our splendid heritage, we will build a future more magnificent than the past. Our eternal Iran will be more dignified, more powerful and more prosperous every day. May the God of Iran help us all along this glorious path.